In this series, we examine aspects of death and bereavement through art, olfaction, and imaginative thinking. Feel free to follow along at home and leave your take on this scented death meditation below. 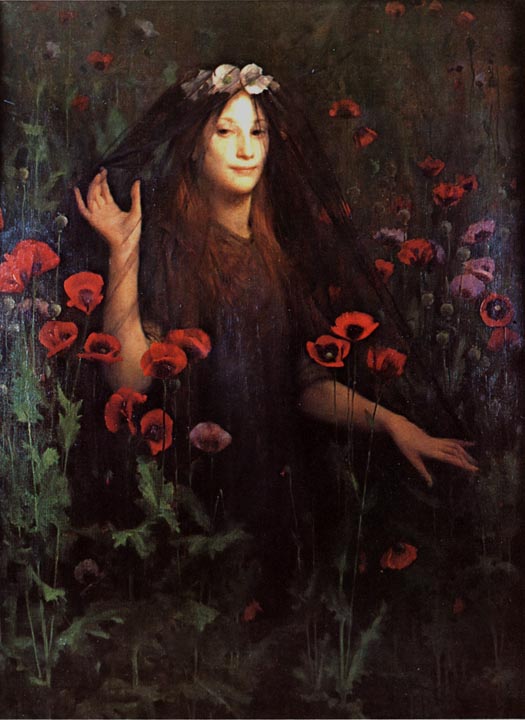 This Pre-Raphaelite work is rather subdued in both theme and colour pallet for Gotch, but like most of his work, it focuses on a symbolic female. Here Gotch subverts the classic trope of Death and the Maiden. Death and the Maiden is presented in the English world with Death as male and engaging with the symbolic Maiden that represents life, youth, vitality, and innocence. In the classic example, Death can be dancing, embracing, or even running off with the Maiden. A not so subtle reminder that death comes for us all, irrespective of age or virtue.

Here Death is the Maiden, not just a maiden but a black veiled Bride. The union of life and death presented as a marriage rather than a seduction. She stands in a field of Opium Poppies further playing with the illusion of dangerous allure. This version of death is comforting, natural, and dangerous.

This scent meditation has to have a Poppy note for sure, but let’s start at the foundations. I would start with Loamy Dark Soil and Wet Green Grass to create a rich earthiness, evocative of a poppy field or a freshly dug grave right after a rainshower.

Woody Oud and Cedar smoulder with a touch of Smoke and Pink Pepper. Wrapping around and forming the dark gossamer veil, obscuring death from life.

The bright popping bursts of Pink Pepper blend with a menage of Indolic White Florals to add sensuality as well as the slightest whiff of decomposition. Nestled on top is the delicate, almost fruity, Poppy, so sweet and charming one may forget the powerful intoxication she possesses.

That’s how I smell it, but what about you? How would you scent Death the Bride? What symbolism do you see in the merging of Death and the Maiden? Leave your comments below. Don’t forget to subscribe to the DS&LG and never miss a scene.