In this series, we examine aspects of death and bereavement through art, olfaction, and imaginative thinking. Learn how at, scented death meditation and then follow along with this meditation.

To celebrate the return of the Scent the Scene series, we will be examining death and smelling art in two paintings creating vastly different depictions of the same murder, The Death of Marat by Jacques-Louis David and Charlotte Corday by Paul Jacques Aimé Baudry

On July 13th, 1793 the revolutionary politician and journalist Jean-Paul Marat was in his bath. Marat had long suffered from debilitating skin lesions and spent much of his time in the tub to ease the pain. Rumours had spread that he contracted his skin ailment from all the time he spent hiding in the sewers of Paris before the Revolution, but his own doctor diagnosed it as Dermatitis herpetiformis a side effect of Celiac Disease.

Jean-Paul was not an attractive man. His own friends referred to him as, “short in stature, deformed in person, and hideous in face”, but Marat was beloved by the people because he had the crazy idea that even the very poorest citizen was due fundamental human rights. Yet, as the glorious French Revolution descended into chaos, he became a deeply polarising figure as he advocated for the murder of prisoners in what became known as the September Massacres. Marat was the spiritual father of the Montagnards a radical offshoot of the Jacobin movement.

As he sat in his bath that July afternoon writing away, 24-year-old Charlotte Corday was granted access under the guise that she had vital information about Marat’s revolutionary rivals. They spoke for about 15 minutes and then she produced a knife from her corset and stabbed him once just below the clavicle, hitting an artery and causing him to bleed out in moments.  Corday, the daughter of impoverished royalists and a Girondin (moderate revolutionists), blamed Marat for the attacks on Girondins and the spiralling violence of the Terror. She did not flee, but waited to be discovered and was tried and executed by guillotine four days later.

The death of Marat has been a favourite subject of French painting, but two artists have made the most popular, and also most, disparate version of the same scene. 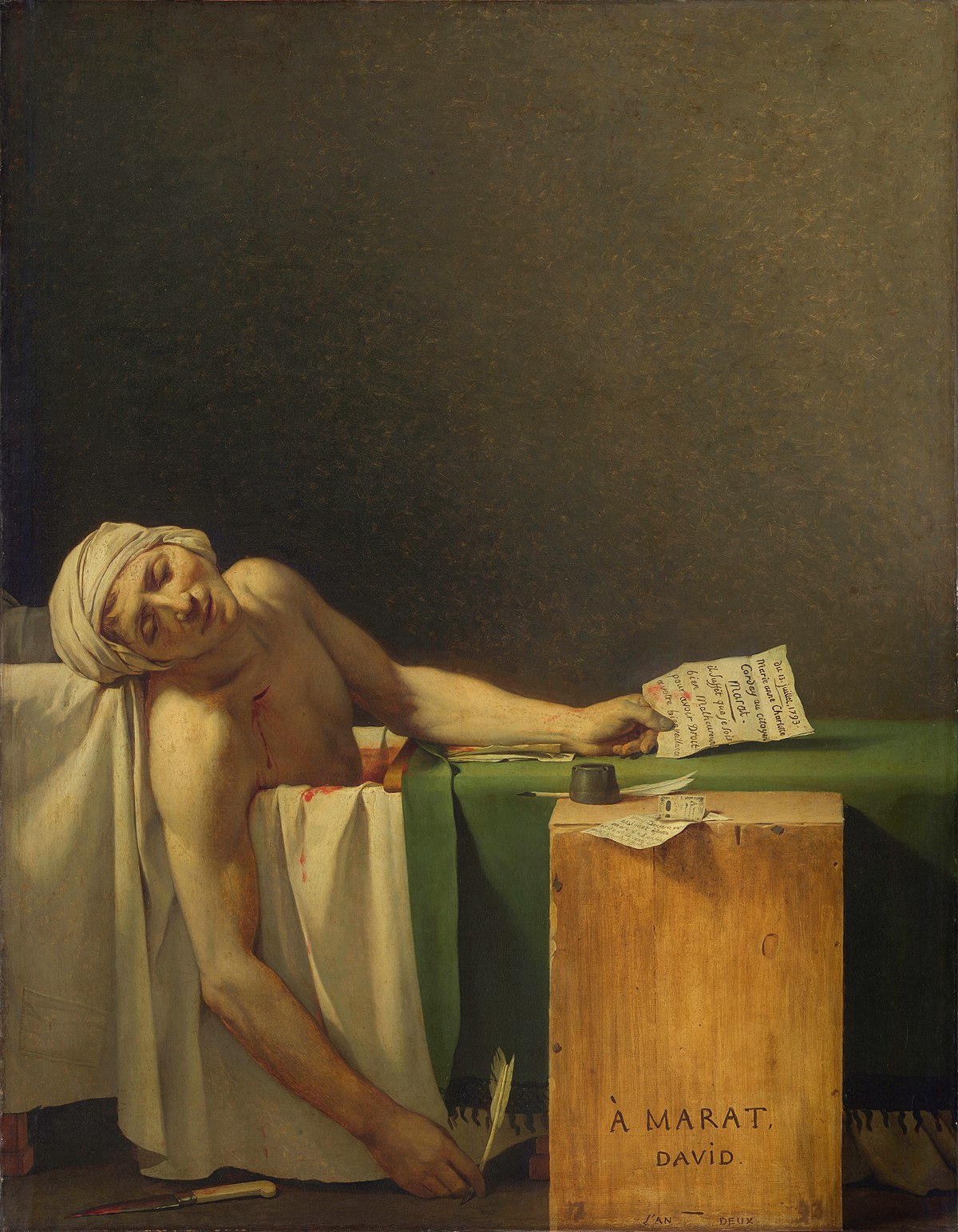 Jacques-Louis David’s Marat was a masterwork of political propaganda. The artist was himself a member of the Montagnards and knew Marat well. He was tasked with orchestrating a grand funeral procession and creating a work that would ensconce Marat as a martyr and saint of the Revolution. Literally, busts of Marat replaced crucifixes as The Cult of Reason promoted anti-theism in the First Republic. The resulting painting was not an accurate portrayal of the scene but an icon. His skin is smooth and glowing. The face, as placid as if asleep, is made younger with higher cheekbones and a stronger chin then the real Marat had. There is no background as the only thing that matter is the light of Reason shining down on Marat’s face. Lighting him starkly but dramatic nonetheless. One delicate wound weeps blood, and the body reclines like Jesus in the arms of Mary. The image is a pieta with Marat comforted only by his words.

Paul Jacques Aimé Baudry’s Charlotte Corday is a very different scene. Painted nearly 70 years after Marat’s death, Baudry paints Charlotte as the heroine of France. Building on the iconic David painting we see the bath from a different angle. Instead of a blank background, we have a small, messy bathroom thrown into disarray in the course of the murder. Marat is shown from an angle that makes his face appear ghastly and his teeth, almost pointed, are sticking out from his jutting lower jaw. He is not clinging to his letters instead his desk has shifted, and his revolutionary words are cast into the water, discarded. The knife is still in his body. Charlotte is Marianne here. Having slain one to save 100,000 as she said during her trial, she stands bolding looking out, not at what she has done, but at who may be coming next. Swathed in light and dressed in imperial blue, she stands protectively in front of a map of France. By the time of the Second Empire, Marat was considered a revolutionary boogieman and Corday, the true martyr of the Revolution. This painting is a reaction to the Terror and a rebranding of the voice of the people.

David’s work was incredibly important at the time and reached iconic status but soon fell out of favour when the power of the Revolution turned on the Montagnards. Indeed David himself had a change of heart after the death of Robespierre and found himself the court painter to Napoleon. He ended his days painting portraits of wealthy ladies and fat little cherubs. The Death of Marat’s importance was only resurrected with the Third Republic that had tempered its revolutionary sainthood with time and middle-class sensibility. Baudry’s was the adored interpretation of the event following the Terror and especially during the Imperial period. David’s painting was being stored in an attic and was all but worthless. Yet the popularity of The Death of Marat has only grown with time while Charlotte Corday has faded away to obscurity. Which I think says a great deal about the spirit of our age.

Neither painting depicts what actually happened instead both tell a story about power and injustice but in very different ways. Both in their way are right and both in their way are wrong. Both speak about winning and losing and what one will do for a cause, but I’m not sure either one of them right. So how would we scent this scene?

I smell a man made into an icon. The strong wafting of Frankincense and Myrrh permeate the inky background as if the air of a church has blown in, but it isn’t quite sacred. There is the earthly funk of Patchouli met with bitter medicinal herbs. Tansy, Lemon Balm, Feverfew, and Chamomile give a wet green plant note. Then the slightly sweet and sour juice of a Pomegranate melds it all together, more an allegory for blood than the actual thing.

A look from a different perspective, a scent reformulated. The Frankincense and Myrrh are gone, but now the Patchouli sits on Wet Earth as a dirty reminder of past indiscretions. The medicinal herbs are still there, but they are not in the bath, just in the room. Dry Tansy, Lemon Balm, Feverfew, and Chamomile mix with patriotic French Lavander, pure Vanilla, and respectable virginal Violets. There is no smell of blood or death in this painting because the murder isn’t the point, Charlotte is, Marat’s death is almost inconsequential.

That’s how I smell it, but what about you? What does propaganda smell like? Do you feel either of these represent a death at all or are they only serving ideas? Is there truth somewhere in the middle?  Leave your thoughts below and don’t forget to subscribe to the Death/Scent and never miss a scene.